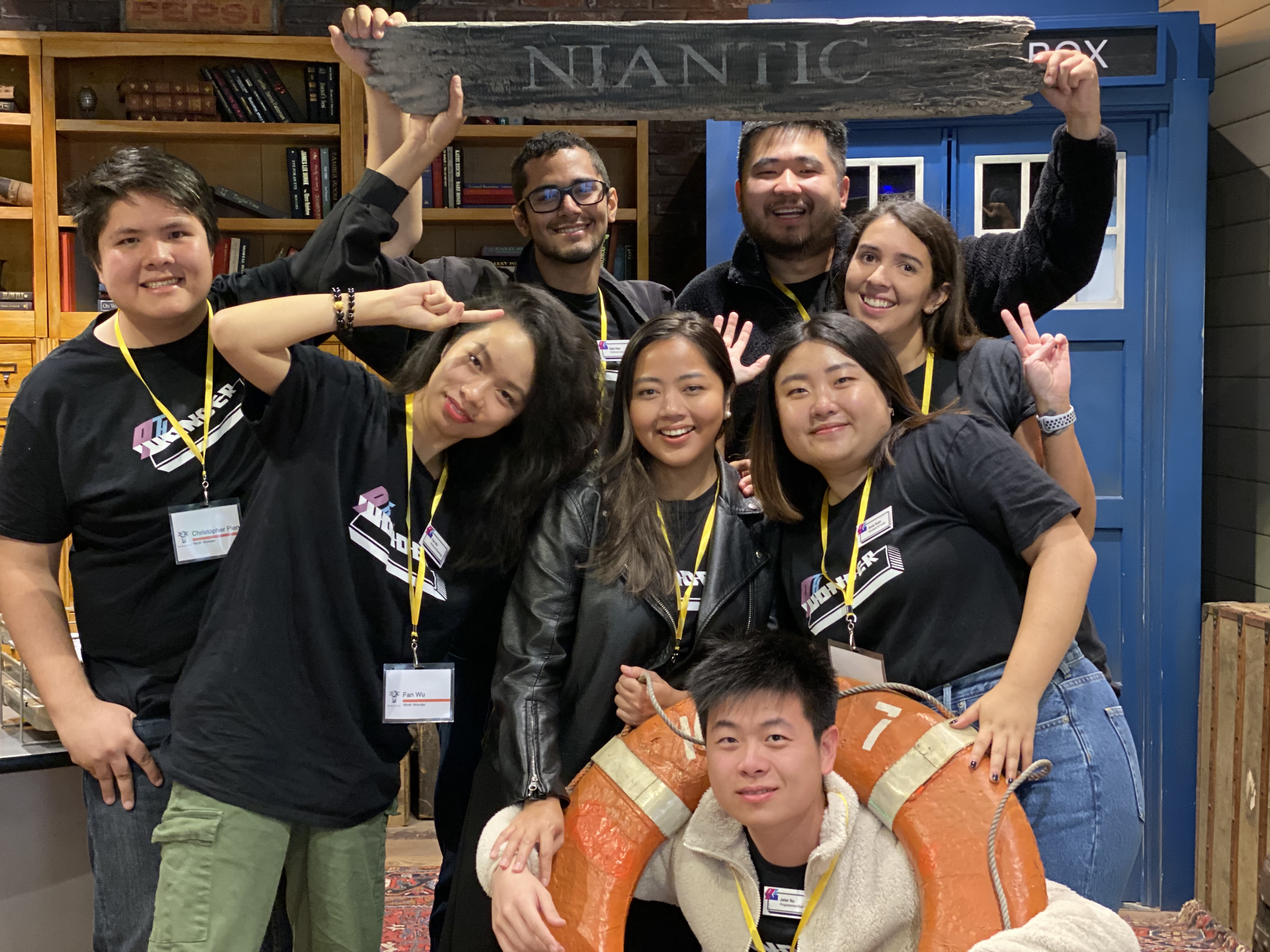 In March 2019, I was approached by a group of students asking me to join their team for the Niantic Developer Contest. First I wondered why did they want to continue to work with their teacher on a project outside of school? And secondly what’s a Niantic? Once I realized the latter was the makers of one of my favourite mobile experiences, Pokémon GO, and soon to be Harry Potter:Wizards Unite, I was in. For the former, being invited to join a student team on a non-school project is a testament to the relationships we build with our students at the Centre for Digital Media (CDM). The fact that they wanted to bring me on in an executive producer type role was very flattering and I was excited to create something amazing with them.

Myself, another colleague, and seven other students got together and created an idea for a Tower Defender, Geospatial, Augmented Reality (AR), mobile game (yes all of those things!). With 3 managers, 3 artists, and 3 developers, Team Ninth Wonder pitched Novagarde to Niantic. With our successful pitch, we joined nine other international teams and entered development phase to take place over 4 months (that also included a team prize of $60,000 USD to be granted after each monthly milestone).

The first milestone was tough. After sending 3 of our team members down to Niantic HQ in San Francisco for a bootcamp (and learning all about their proprietary software called the Niantic Real World Platform) we were left with only 2 weeks to deliver the first geospatial part of our game (also a challenge considering the faculty work full time and the students were in school full time). After many evenings, weekends, and a long final weekend in the boardroom, we submitted our geospatial loop and continued towards the next milestone.

Milestone 2, we pushed into AR development. Many of us had AR experience but with the end of term at CDM looming, we were being pulled in multiple directions. Again, after more evenings, weekends, and a VERY long final weekend in the boardroom we completed the second milestone.

For the third milestone, we got some feedback from Niantic that was tough to hear. They didn’t see how our game could connect Geospatial and AR. They thought we were missing a lot of elements and just wanted to see more by this stage. This news, even though it was disappointing, pushed us forward. We met as a team (this was a challenge as almost the entire team had started new full time jobs) and pushed out some new elements that took our game to the next level. We delivered Milestone 3 connecting our geospatial and AR loops and pushed to Milestone 4 which was full integration of art assets.

Once we delivered all 4 milestones (and passed!) we began our prep for the demo days (3 days mid-October) in San Francisco. Check out the trailer to our game:

Day One: Go to iconic Ferry Building at 10am with 30 minutes to do a run through of the demo on the seven iPhone X judge devices.

This was the plan. And well we got to the Ferry Building at 10am, entered through the Tardis (secret passageways all over this place) and then everything went wrong. Our programmers stayed back at the hotel, as they had pulled an all-nighter getting everything right for our demo. But we didn’t have a certificate to send our game to the mobile devices the judges would be using. We started to rehearse our presentation and our sound didn’t come on. As we tried to fix the sound and wake up our programmers, we saw team after team come in and test flawlessly. Our anxiety was increasing. After 3 hours of no luck, we finally woke our programmers, got the certificate, heard the sound, and ran a great test on every device. There wasn’t much we could do after this test but have fun in San Francisco! Some shopped, some toured, and some worked.

Day 2: Get to the Ferry building by 9am, do a quick presentation, and then a demo for the judges to end at 9:30am.

Dressed in our iconic Ninth Wonder t-shirts we got to the Ferry Building for our final pitch and presentation for the judges. Myself and two other team members did an amazing 5 minute slide deck including a near-professional trailer of our game. This was followed by 3 of us leading 7 judges through a working demo. And those of us in the media/tech world know that whenever a demo happens, nothing works. Or at least something always goes wrong. But not today. Today the demo couldn’t have gone more flawlessly. Our judges were able to collect resources and build towers. The wave mode happened exactly on time and all spawning areas appeared and worked. And then the hardest task: AR multiplayer. This totally worked too! We had 2-3 players attacking one tower and they could see their little drone hovering about each player. 9:30 hits. Demo done. We went out for breakfast and a debrief with the team knowing we did all that we could do. At 1:30 we went back to Niantic for an open demo for all Niantic employees (and the other teams). This continued into late in the evening and we were exhausted. Happy with our day we awaited day 3 results.

We got to sleep in a bit (a relief for many of us after long nights and early days) and headed to the Exploratorium (think Science World) for the results. We were introduced to John Hanke, CEO of Niantic, who told us how our participation of this contest will push forward the usage of the Niantic Real World Platform. After John, Kellee Santiago (one of the main contacts we interacted with the entire contest) announced the winners. First honourable mentions. Not us. Then third place. Not us. Second place. Not us. I turned to the team, “Well, either we did it or we got nothing”. First place. Not us. But a great team who was very nice and had a unique idea. Slightly disappointed, but still awarded with cool Tile Niantic prizes and a runner up trophy, we headed back to the Ferry Building for small reception and our chance to say thank you and goodbye to Niantic.

Even though we didn’t win the prize (as cheesy as this is about to sound) getting to participate was a huge prize in itself. We made the Top 10 in an International competition. We competed against professional teams and full companies. We got to make our game and learn new software. And we got to work as a team seeing a product from beginning to end. We couldn’t have done it without the help from many employees at Niantic (for many emails, video chats, posts) answering all questions. We also thank the CDM for supporting us with the skills to enter the contest and support throughout. And finally, to our friends and family who understood what it meant to work on work before and after actual work. This was a great experience and I know we are excited to continue to work on Novagarde. Check out the video of our experience